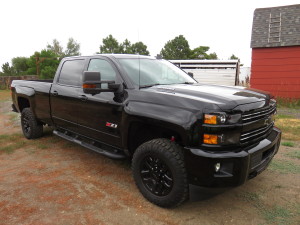 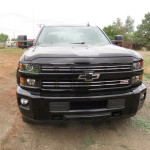 First look just makes you want one. Midnight Edition stands out in so many ways. All Black with some chrome in the grill. Black bumpers, black wheels, even a black “bow tie” on the hood, Chevy’s trade mark. The interior was called Jet Black. This truck was a Z71 heavy duty 2500 long bed, haven’t seen one for a long time. I old times 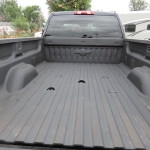 when I was young, most truck were long beds. Now the “standard bed” is a short bed.  I put my Honda Rancher ATV in the bed and closed the tailgate. It’s been 3 years since I’ve owned a long bed truck and I miss it.  It helps the ride of a heavy duty with longer wheelbase, yes it’s not easy to park at Walmart. Equipped with Digital Steering Assist new for 2016 is a step above power steering. This Silverado is the LT so it’s loaded. The Duramax diesel is quiet, the cab is quiet, not always easy to tell it’s a diesel driving down the highway. The Duramax is still 397 horsepower and 765 torque. Accelerates well with a trailer, the best mid-range power in it’s class. 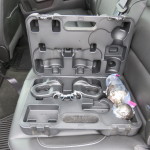 With this configuration, crew cab, 4×4 with the only axle, 3.73 ratio is rated to tow 12,900 max trailer. 5th wheel/gooseneck hitch  from the factory is new from GM. I towed a conventional tow hauler weighing in at 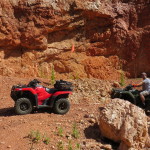 9300 lbs to Woodland Park with two ATV’s for some fun with my son in the high country. I rolled my ATV down the mountain, but that’s another story and can be seen on my YouTube channel. Nice to get the dents and scratches out of the way so I can do serious mountain climbing on 4 wheels. At least the truck ride was smooth. Exhaust brake, grade shifting and GM’s great cruise control with a load and towing mirrors, made it a fun safe run up through Deckers with all the motorcycles on the switchbacks. On the heavy duty 2500 weight distributing hitch was not required or needed. It handled the 9300 lb trailer with ease even though my toy hauler is a brick like an enclosed car hauler susceptible to wind. That far up in the mountains gave us no phone signal except for the truck’s 4 G LTE WI-FI hotspot. 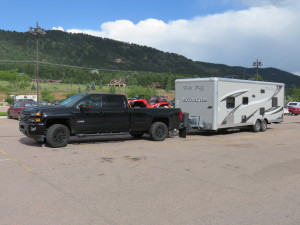 MSRP is $62,810 of that $8395 is for the Duramax diesel which is the cheapest diesel option of the big three. The Midnight Edition cost $2205 for all the black everything and sprayed in bedliner and 18 inch black wheels. The Z71 off-road package is only $480 and I think worth it with skid plates and hill decent. Now for the really cool stuff, new for 2016 is the wireless Trailering Camera System. Camera’s are the big thing now, Ford’s all new 2017 Super Duty’s will have optional 7 camera’s including a wired trailer camera. GM’s offering is very useful with camera’s under the trailer 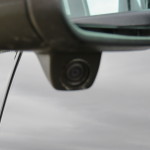 mirrors that will show you the blind spot on the side the turn signal is blinking. And it is seen in the center 8 in screen in the dash. It’s like a convex mirror but better. You see the lower beltline where the little cars hide, and curbs and mail boxes. Then there is the high cab camera to watch 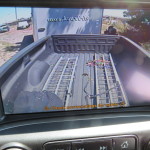 your gooseneck hookup, watching cargo and of course the bumper camera for trailers. The trailer wireless camera you attach to the back of your trailer. You should wire it to your trailer lights for power. It only stays on when the truck is in reverse, so backing up is good. I wish it stayed on to watch cars that are sneaking around the rear of the trailer on the 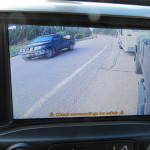 road, but there are rules that say pick speed or time to shut off the cameras. Most shut off at 10 mph.

You can buy optional cameras for inside your trailer. In the dash you can select looking at two or three cameras at once. This is the future, camera watching our every move, no that’s in London. I couldn’t find the Trailering Camera System in the Maroney sticker. It’s like an aftermarket camera system available from GM but not warrantied by GM. EchoMaster has it’s own 3-year 36,000 mile warranty. It appears to cost $999 for the best system plus installation.  It’s a useful tool for trailering. www.MrTruck.com