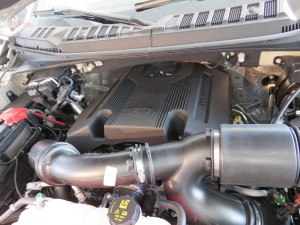 We new the Ford Raptor for 2017 was coming with a 10-speed. Now we know the mainstream best selling F150 for 2017 will also have the Ford built 10-speed. And increased power with 30 lb.-ft more torque. This comes from 2 injectors per cylinder and port injection in the intake. Sounds like all the power and extra injectors would suck gas, Ford claims in the new 2nd generation EcoBoost with electronic waste gates on the new twin turbo’s and the new 10-speed will get better fuel mileage than the previous version.

For the first time the 3.5L EcoBoost will have integrated auto start-stop e-pump which is built into the new 10-speed transmission. That transmission has 6 closely spaced gears, then direct drive and 3 overdrives. And the transmission is only 1/2 longer than the previous 6-speed. When we get the new 2017 F150 to Colorado, of course we’ll test it with trailers on I-70 thru the mountains. It will be interesting to see it tows at altitude. Ford claims improved tow-haul and sport modes, but the Rockies will judge the improvements. 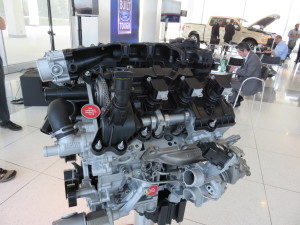 The new electronic boost on the new turbo’s will boost the engine at lower RPM’s. That should give it a better power curve which is already similar to a diesel. The extra 30 lb.-ft. of torque all the way up to 450 torque is at peak torque. The 450 torque beats all the diesels and gas engines in the 1/2 ton class.

Ford bet the farm on the EcoBoost V-6 twin turbo’s. Between the 3.5L EcoBoost and the 2.7L EcoBoost twin turbo’s, 60% of F150 sales are from the EcoBoosts. This 2nd generation EcoBoost and 10-speed is, according to Ford going to have better acceleration. I thought the previous 3.5L was a race car already. Again as with the 2015 aluminum F150, the 2017 F150 will be lighter. 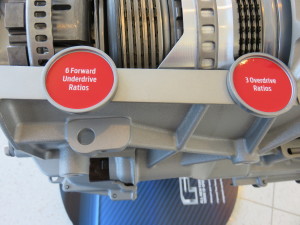 More than 20 patents account for the improvement like lighter turbine wheels from the aerospace, hollow camshafts, new roller-finger follower valve-train and improved intake and exhaust valves. The Auto Start-Stop should save fuel and lower CO2 emissions. The 10-speed transmission has lower bottom gears, eventually that will allow higher final drive ratios like 3.05 instead of 3.55 which will come in the 2017 F150.